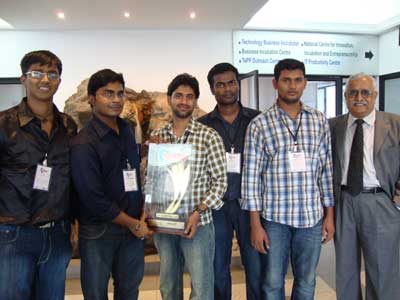 Production of Carbon nanotubes(CNTs) from the flue gases emitted by the industries is the team’s main innovation. Normally, CNTs are produced in laboratories using CVD( Carbon Vapour Deposition) furnace by supplying high temperature(600 – 1200 degree celcius), high pressure, Vacuum atmosphere or inert atmosphere and a continuous source of carbon dioxide, methane i.e. carbon source and hydrogen. All these requirements for the CNT production are available as waste in the furnaces & exhaust pipes of various industries. The flue gas released by the industry has carbon-dioxide, methane, nitrogen, hydrogen and some particulate matter. The content varies on the type of fuel, but the above mentioned constituents will be mostly present. The furnace operates at very high temperature, pressure and has a naturally generated vacuum atmosphere inside it. The burning of the fuel ensures continuous supply of flue gases. All these conditions present in the industrial furnaces, boilers and exhaust pipes are wasted in the form of energy and matted. Tapping this resource and by modifying the CVD (Carbon Vapour Deposition) method by adequately modifying the substrates, the team demonstrated the possibility to cultivate CNTs successfully.

TechTop 2010 is the fifth edition of this annual competition organised by Technopark and Degree Controls Inc, in an effort to locate budding techno entrepreneurs at an early stage. For TechTop 2010, 222 teams from 11 States participated in the preliminary round, out of which 58 teams were selected and asked to complete their projects. Out of this 21 shortlisted teams will be presenting their innovative projects today and tomorrow. SASTRA’S winning project will be forwarded to the Department for Scientific & Industrial Research (DSIR) for Technopreneur Promotion Programme (TePP) / Technology Information, Forecasting and Assessment Council (TIFAC) funding.